Bundibugyo district next to The Female Hotsprings at Kitagatageo – graphical coordinates 00 44′ – 00 53′ N – 290 57 – 30o 11’E. It’s an eastern annex of the huge Ituri forest, and it formed a section of the forest range throughout the climatic disturbances of the Pleistocene era. It is among the richest places with flora plus fauna in particular birds across Africa.

Semuliki National Park covers an area of 220 square kilometers and it is among the most recent national parks within Uganda and was opened in October 1993. The park terrain comprises of a level land form having a gently undulating area that ranges between 670m and 760m above sea level. Most of the parts within the park do flood during the rainy months since all the rivers plus streams from the neighboring areas actually drain here where the drainage isn’t good. The mean annual rainfall in the park is 1,250mm with the wettest months being from March to May and from September to December . the  temperatures range from 18C to 30C however small variations may be experienced in the day.

Activities to do in the park:

Semuliki National Park is a low lying tropical rain forest therefore moist as well as semi-deciduous. It has 336 species of trees recorded, of which 24  of these are endemic to Semuliki and the eastern part of this range, which is specifically  shared by 1 or 2 adjacent forests among which are: Isolana congolana , Nesogordonia

In comparison to the variety of butterflies, small animals plus birds elsewhere, Semiliki’s fauna includes 435 species of birds making up 34% of the total population in Uganda. among these a number of them can’t be seen in other parts of East Africa and are Africa’s most spectacular and sought after species of birds such as the horn bills plus lyre tailed honey guide.

Semuliki National Park is an exceptional Uganda wildlife safari destination since it supports 63 species of mammals, of which nine are diurnal forest primates like the chimpanzees, vervet monkeys, olive baboon plus the blue monkey, and among the nocturnal primates are pottos and galagos. Other mammals within Semuliki National Park are forest beecroft’s flying squirrels, water chevrotaains, buffaloes, pigmy squirrels, small collared fruit bat and the blue duiker.
Approximately 374 butterfly species plus months have actually been identified within semuliki of which 46 are forest swallow-stails plus charaxes and a minimum of 81 large moth species, of which twelve are classified as endemic.

The location as well to the diverse habitats including forest swamps, Savannah woodland, grasslands, warm swamp and an huge network of hot springs in the park all account to her great diversity of species. 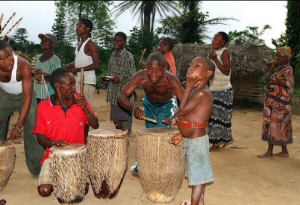 There are 4 ethnic groups of people staying in the region of Semuliki National Park. The Bakonjo plus the Bamba live on the mountain slopes and in the valley respectively, and are mainly agriculturalists surviving on cash crops like cocoa, rice coffee and potatoes plus food crops majorly bananas.
The Batuku people live on the floor of the rift valley just north of this park and are mainly pastoralists that entirely depend on products from cattle with which they actually trade with their neighbors, those in Uganda and even those from the D.R of Congo.
The Batwa pygmies who are primarily gatherers plus hunters form a section of the Ituri ethnic group, and these for centuries have depended on the Semuliki forest for their survival. nonetheless their lifestyle is currently changing because of the daily interaction with other nearest local communities as well as the influence of  tourism.

Tourist Activities to engage in;

The jungle life of Semuliki National Park is a spectacular one particularly for birding safaris, primate visits, and butterfly as well as plant enthusiasts. Its nature walk takes you up to the winding river Semuliki, which is the only one of this kind in the whole of East Africa.
On this safari, among the forest animals that you will see are: leopards, crocodiles, buffaloes, various primates, elephants and sitatungas, plus a diversity of forest plus water bird species.

Visitors who are Interested in sport fishing should bring along fishing gadgets. A safari in Semuliki National Park offers memorable and spectacular views. Please come and personally experience the thrill of the winding Bundibugyo road via the Rwenzori escarpments. En route up the mountains, you will pleasure in breathtaking

views of the winding River Semuliki, the beautiful hot springs plus the large buttress roots of the trees in the tropical rain forest, which extends up to Ituri forest found in the D.R of Congo.
located in an area of hot mineral covered swampland are 2 hot springs, and there you will marvel at the 2m jet of hot water at approximately 30C plus a 12min diameter pool oozing with boiling water at approximately 106C. actually you can boil some food within this natural boiling pool such as eggs which can be boiled and ready to eat in just 10 minutes. So book this safari today and experience all this natural wonder personally because you will certainly live to remember each moment. A trip to the neighboring protected areas such as Toro-Semliki wildlife Reserve, Rwenzori Mountains National Park and Kibale National Park can be organized for the visitors.

Once in fort portal, Sempaya gate is 52kms two 2 hours drive through a winding muram road through the lower ranges of Rwenzori Mountains. At several places you can view the rift valley floor where the Semuliki flats and Toro-Semuliki Wildlife Reserve are located.

We recommend you use A 4WD vehicle for the whole journey.
Using the public transport needs that you take a taxi or a bus from the capital Kampala to the town of Fort Portal. From the taxi park in Fort Portal get on a bus or a pick-up truck to  Bundibugyo and get off at Sempaya gate.

Accommodation in the park:

This park offers limited accommodation options, however you will find several accommodation facilities in the town of Fort Portal as well as Bundibugyo which however are mainly up market lodges.
The campsite found at Bumuga, is approximately 3 kilometers from Sempaya gate and it is open to guests.
Meals are Prepared on order. You may as well prepare your own at the site. There are cooking utensils offered for hire.
When to visit:
You can visit any time throughout the year!