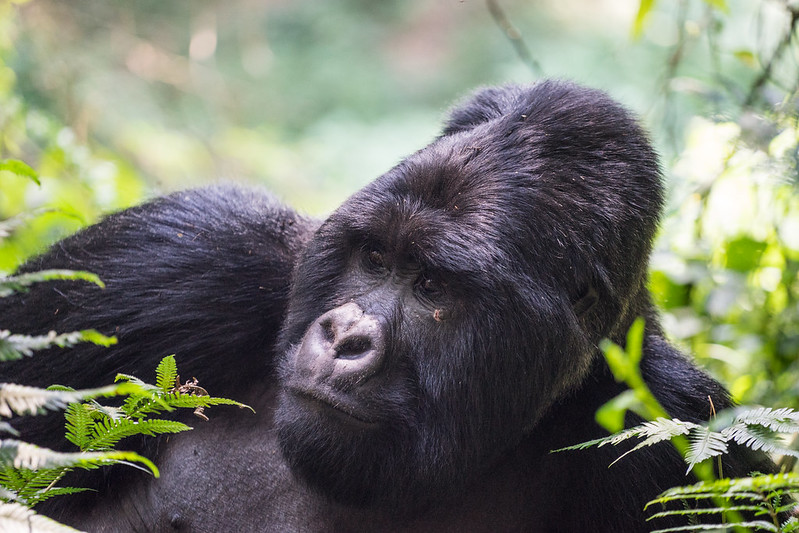 This Park is found on the northern slopes of the 3 extreme northern Virunga Volcanoes which are: the Mt. Gahinga at 3,474 meters, Mt. Muhavura at 4,127 meters, as well as Mt. Sabinyo at 3,645 meters. This park is delimited in the south by Rwanda and in the west by the D.R Congo. All these neighboring countries shelter their own part of the Virungas. The 3 parks jointly form these ‘Virunga Conservation Area’ of to 434 square kilometers of which the Mgahinga is just 33.7 square kilometers which is only 8% of the Virunga Conservation Area.
Mgahinga Gorilla National Park has 2 wet rainy seasons; from February to May and from September to December every year. The highest amount of rainfall received each year is 250mm in October and the minimum is in July at 10mm.

Although it is the smallest national park in Uganda, the Mgahinga Gorilla National Park is among the leading safari destinations in Uganda because of its resident population of Mountain Gorillas and it is one of the two parks within Uganda which are habitat to approximately half the population of the endangered Mountain gorillas in the world, therefore Uganda is a Gorilla safaris destination and a wonderful African Wildlife safari destination because of its big wild animals like the bush bucks, buffaloes and elephants, in addition to the endangered golden monkeys among many others.

The park comprises of a section of the forested slopes of the 3 extinct volcanoes. These large Virunga Volcano 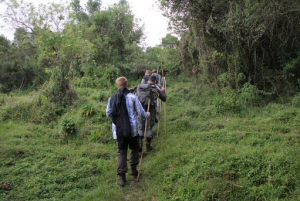 cones dominate the terrain when observed from a distance and stand in front of you as you drive to this park. When you arrive at the park, there is a 15 minute walk to the viewpoint from the Ntebeko Gate and there you can enjoy breathtaking sights of the entire surrounding. Mgahinga Park actually is of a significant biological use since it’s among those mountains which offer refuge for mountain associated animals plus plants that moved up or even down these slopes when the weather became warmer or even cooler during the climatic changes of the ancient Pleistocene ice ages. The outstanding Virungas are habitat to a huge diversity of wildlife, among which are approximately half the population of the endangered tranquil mountain gorillas in the world.

Mgahinga Gorilla National Park experiences a calm climate which supports the thriving Afro-montane vegetation as well as the plentiful bamboo vegetation which is a delicacy to the Mountain gorilla. Among other types of vegetation in the park is the Lobelia, Haege-nia spp.
The dominant ethnic groups of local people within Kisoro District are Bafumbira who inhabit most of the Kisoro area and these people are mainly cultivators or farmers. The indigenous Batwa (Pygmies) who long ago inhabited the caves and primarily fed on wildlife do form the marginal ethnic group in the region.

Gorilla Tracking safaris are the most fascinating tourist activity within Mgahinga Gorilla National Park is. The

habituated gorilla group in the park is the Nyakagezi which comprises of 9 members among which are two silver backs, three adult females, two juveniles plus two infants.
Gorilla tracking is an energetic activity which may take the entire day. During this safari, you will be led by an expert guide as you trail the gorilla’s empire and he/she will explain about gorillas informing you about their general behavior, ecology as well as movements.
Please Keep in Mind that the chances of seeing these gorillas are NOT 100% guaranteed although chance of viewing them are really high.  Because they are wild animals staying in the jangle, they do not have a predetermined routine, for that reason finding them needs luck as well as the experienced of the guides. The guides closely know the gorillas since they personally habituate them, they will therefore take you to the place where the gorillas where last seen the previous day. They may as well be able to estimate the duration of the hike right at the beginning of the journey.

please remember visitors can at all time as the guides to slow down in case they are moving too fast or in case you wish to have a rest, or look at the various birds and flowers; your guide will certainly wait for you patiently.

-The weather here is irregular and it may change any time. Remember to carry your rain wear, sun glasses, sunscreen and a hut.

-on finding them, make sure that you maintain a 5m distance away from Gorillas. in case you are approached by one of them, move away gently.

-Do not point or wave your hand- this may scare or even agitate gorillas.
Move slowly and maintain your voice low or better stay silent when tracking

-Do not take photographs with your camera flashes on; these may threaten the gorillas.

-You may bring along binoculars to help you see the distant features plus creatures. 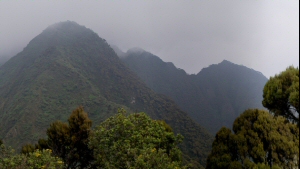 which are challenging to expert climbers. Hiking up this mountain takes you up a ridge on the eastern side to the first peak. In case you wish to proceed, the climb to the second peak involves walking alongside a ridge with spectacular views into Rwanda as well as Uganda`s gorges, offering you an unforgettable hiking safari experience.
Lastly, the hike to the third steep that has numerous ladders plus mush scrambling, you will be certain to get your hands dirty as you head up to the peak. On arriving at the peak, you will be standing in 3 countries; Uganda, Rwanda as well as the Democratic Republic of Congo at the same time! This hike lasts for approximately 8 hours and covers 14 kilometers.

Mt. Gahinga; (at 3474 meters)
This Maintains name – Gahinga means ‘a pile of small stones’ in accordance to the local people. As you head to Mgahinga National park, you will be able to see the piles of stones in the garden fields.
Mt Gahinga is logically bigger than ‘gahinga’ however her closeness to Mt Muhavura makes it appear smaller. This trek which runs for approximately 6 hours takes you through a Bamboo forest. Mt.Gahinga once had a Crater Lake on its peak, however this changed into a verdant swamp. This swamp which covers an area of  8km is among the finest attractions on Gahinga.

Mt. Muhavura; (at 4127 meters; locally meaning ‘The Guide’)
This mountain can be seen from Kisoro and it serves as a guide. This characteristic cone-shaped Mountain offers some of the finest views in Uganda. Most of this climb is over a rocky surface roofed by short grasses plus small shrubs. On reaching the top, you are rewarded with sights of the Virunga volcanoes, Mountain Rwenzori peaks, Lake Edward found in queen Elizabeth National Park as well as Bwindi. This 12 kilometer hike goes for around 8 hours in total. Hikers are recommended to camp at Muhavura base camp on the night before the hike. Since this place doesn’t have facilities you need to carry a tent, water, food plus sleeping gear.

Garama cave;
The Garama cave is 342 meters long and 14 meters deep several years ago, this cave was inhabited by the 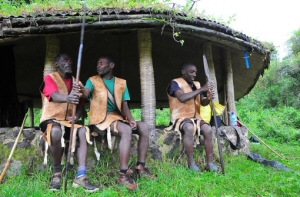 pygmy Batwa people whose warriors attacked their neighboring communities,  but today it is inhabited by bats. From the park headquarters to this cave entrance, is just 3km, and the guide will recount to you how these Batwa survived and even made attacks basing from this cave.
Viewing Platform;
There is a viewing platform 800m from the Park’s gate. On arriving at it, you’ll be rewarded with splendid views of the Park as well as its surrounding. This activity is free of charge and does not need a guide. Additional information regarding this spot can be obtained from the display panels found at the hill-point.

This is a Five hours hike covering a distance of 10km. It leads you toward Sabinyo and ascends up the bottom of Sabinyo through the Montane forest a head of turning toward the D.R Congo. On this trail you will be rewarded with breathtaking sights of the gorge as well as peaks of Mt. Sabinyo. On arrive at Congo, you will return along the official border crossing. The trail back to the Head Quarters of the park rewards you with sights of various bird species. You will find two rest huts along this trail in which you can have a break.  Also along this route you will commonly encounter elephants plus golden monkeys. 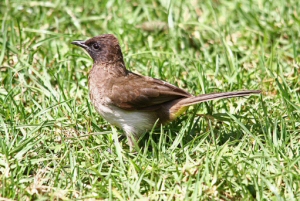 bird species which have been documented among which are a number of species endemic to East Congo Montane Area.
More than 295 species have been documented within the Virunga Conservation Area in total and are endemic to Albertine Rift Afro-montane area representing 59% of the area’s total recognized endemic species.
Contact the Management of the Park for a guide that will lead you around and detail you all about these various birds. Make sure you bring along your binoculars for better views.

Currently offered on request is free-birding done at the fringes of the park. Guides are all the time happy to lead you out from 5pm to 6 pm in the evening given that you make reservations by 10:00 am in the morning of that very day. You have an alternative of going for a long walk or choose to unwind in the campground. Choosing the lengthy buffalo wall in the direction of the D.R Congo will lead you to a wetland area and there you will enjoy stunning view of a diversity of birds like the Fire Finch, Yellow-Vented Bulbul, Stonechat, Waxbills, Grey Capped Warbler, Speckled Moosebird, Whydah and Ibis. You will enjoy this hike at your own leisure pace as the guide shows you the finest spots.

How to get there;

By road:
Traveling from Kampala; It is 8 hours drive through Kabale to the town of Kisoro using a 4wd vehicles which is recommended. People without private transport, can use the public bus transport services, which depart at 0700 hours. In Kisoro town, you walk or board a special hire car to the gate of the park. 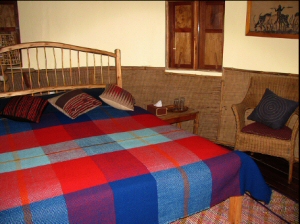 Using Air: you may fly to Kisoro, since Flight preparations can be made through Eagle Air which company offers flights on Fridays as well as Mondays from Entebbe International airport to Kisoro.