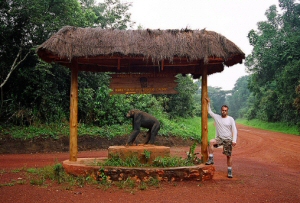 whole of Uganda. it is habitat to forest wildlife, with an outstanding 13 different primate species among which are Chimpanzees. The Forest mainly covers the northern and the central regions of the park along the high Fort Portal Plateau. The highest peak of Kibale Park is found at the extreme north and stands at 1590 meters above sea level. The Northern part of Kibale is as well the wettest region, receiving a average annual rainfall of 1700mm, especially from March to may and then from September to November. Its climate is in general favorable with an average annual temperature between 14 and 27C. The Temperatures are at their peak (and least rainfall) in the south regions where the landscape drops into the scorching rift valley floor whereas the forest disappears into open grassland.

Southern Kibale borders Queen Elizebeth National Park and these two protected areas host a lengthy 180km migration corridor for the various wild animals extending from Ishasha, which is a remote area in the southern part of Queen Elizabeth NP, up to Sebitoli forest within northern Kibale.

The Kibale-Fort Portal region is among the most rewarding places to explore in Uganda. This Park is found near the peaceful ndali-Kasenda crater area and in just a half day’s game drive of the Queen Elizabeth, mountain Rwenzori, Toro-Semliki Wildlife Reserve as well as Semulike National Park.

Getting to the park;

Kibale National Park is situated in Western Uganda, just 26km southeast of the town of Fort Portal. Kanyanchu River Camp, which is the main hub for tourism activities, can actually be arrived at from Kampala in two ways: firstly from the north, through Mubende and Fort Portal, or secondly from the south via Mbarara as well as Kamwenge. The northern route is rather shorter and faster, with a tarmac 300km road running up to Fort Portal then a 36km murram road to Kanyanchu. The Sebitoli Forest Camp, which is another tourism centre is easier to 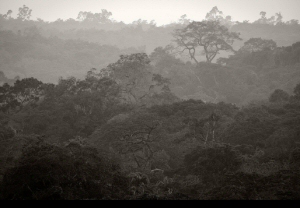 arrive to. This is found directly along the Kampala road, just 16km before Fort portal. Fortunately Public as well as Kamwenge (through Kanyanchu)

Various Accommodation in the park;

Kibale Primate Lodges offers a variety of accommodation within Kanyanchu among which are up market tented camp, stone cottages and tree houses. Basic cottages can be located at Sebitoli. These two sites offer campsites plus canteens that offer basic meals prepare on order.

Basic as well as mid-range accommodation is offered within the adjacent Bigodi plus Nkingo villages while more choices can be got within the Ndali crater region. This ranges from the high end Ndali Lodge to the nice budget option at Chimpanzee Guesthouse or Lake Nkuruba. Also Accommodation can be obtained in the town of Fort Portal.

The differing altitude of Kibale NP supports a number of habitats, ranging from the moist evergreen tropical forest on the Fort-Portal Plateau, the dry (semi-deciduous) tropical forest, to the woodland plus savannah on the floor of the rift valley.

Close to Kanyanchu, in the central park, the high forest has a combination of deciduous plus evergreen trees and the evergreen species being the dominant. The trees rise to more than 55 meters and display a semi-closed shelter of stratified tree rows. The underbrush is thin with shade herbs, shrubs, plus a diversity of ferns plus broad leaved grasses. 351 species of trees have been recorded within this park.

The variety plus abundance of primates within Kibale is the greatest within Africa. The most outstanding of these 13 species are the Chimpanzees, which are man’s closest relatives. The 1450 Chimpanzee in Kibale represent Uganda’s highest population of this endangered primate. The park is as well habitat to the uncommon L’ Hoest’s monkeys as well as the largest population of the endangered red colobus monkeys in East African, blue monkeys, black & white colobus, potto, blue monkey, bush baby, grey cheeked mangabey, olive baboon and red tailed monkey. 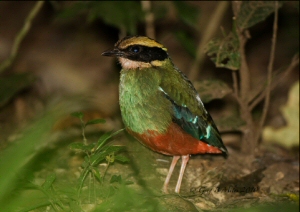 Additional mammals are here, though uncommonly seen are the forest elephants, buffaloes, leopards, bush pigs as well as duikers. An enthusiastic observer can as well see reptiles plus amphibians and various other vivid butterflies.

The people staying around this park are primarily the Batoro plus the Bakiga. The indigenous are the Batoro while the immigrants are the Bakiga from the heavily populated south-western regions of Uganda. These Batoro pride in their cultural heritage of Toro kingdom, a graft of the very old kingdoms of the great Lakes region of African. The Omukama (who is their King) plus the Kingdom exemplify the traditional plus cultural values of these Batoro people. the Bakiga up to today continue to preserve their tradition plus culture as expressed in their Language, forklore and dance.

The park has a major role in the daily lives of the native people who enjoy a number of benefits from it. The forest offers these people customary forest products like wild coffee, medicinal herbs, food, fuel- wood as well as building material.
Activities in and around Kibale National Park 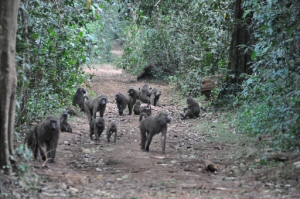 Kanyanchu is a center for tourism activities and it is found in the central region of this Park. The primary attraction is actually the chance to track Chimpanzee within their Rain forest habitat. A group of Chimpanzees has been habituated ever since 1991 and fortunately the possibilities of finding them are really good (more than 90%). Remember this park can only be accessible when on foot since there aren’t any tracks open for tourists’ vehicles.

This habituation Experience enables you to set out together with the researchers plus the habituators of this park as they trail the Chimpanzee all through their everyday activities, thus getting these chimps used to the presence of humans without changing their natural behavior. During this, look forward to seeing Chimps de-nesting (getting out of their night-time nests) between 05:30 and 06:30, follow them through the day and see them create brand-new nests in which they retire for that night at about 19:00. This habituation Experience is conducted during the off-peak tourist season months (which are: March, April, may as well as November).

The most well-liked of the walks in Kibale begins from Kanyanchu Visitor Centre in the morning at 08:00 as well as at 15:00 and takes 2 to 3 hours. The Chimpanzees are the most sought after Primates by visitors, however you should as well look out for Black & White colobus monlkeys, red tailed monkeys as well as the gray-cheeked mangabey. The guides will show you sun birds, in addition to other species of birds and will in fact explain to you the traditional importance of plant species found in the forest. This walk runs for 6 people per group. Earlier booking is very important

Forest Hike in the park 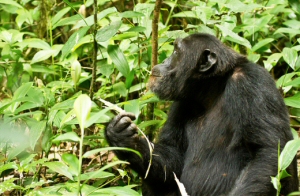 February and June to September. It takes you through the various park habitats among which are: grassland, riverine forest, tropical rainforest and swamps. You will get the opportunity to see a diversity of bird species plus primates and if lucky duikers and bushbucks. This walk starts at 08:00 from the Kanyanchu Visitor centre and finishes at the elephant wallow at around 14:00. Carry with you enough drinks plus snacks; and we recommend booking in advance.

Children below or 12 years old are not allowed to see the Chimps but instead can opt for a short 1 0r 2 hour educational forest walks which is followed by exciting creative activities. The Parents may enjoy forest walks knowing that their children are as well taking part in worthwhile activities guided by well trained rangers. The children will visit this forest and even learn more about its ecosystem plus its inhabitants on this short fascinating walks. Creative activities plus Games such as batik making, pond dipping, photography as well as cyanotype are offered.

Sebitoli is situated 12km from the town of fort portal town along the Kampala-Fort portal road. This section of the forest provides wonderful views of birds plus Primates within the damp evergreen forest having a semi-closed cover of stratified trees.

Adventurous visitors can follow a two to six days trail in the forest. The complete walk begins or ends at kanyanchu or at Sebitoli. This route takes you through the forest during day time, and then in the evening sleep within the community managed campsites close to the villages of Nyakalongo, kikoni plus Nyaibanda. These offer the chance to interact with local people and get an insight into the cultures of the Batoro plus Bakiga tribes. You can hire Porters at the trail heads who will carry your equipment. Groups utmost have six people to undertake this walk; and we recommend earlier booking.

Bigodi Wetland Sanctuary is located immediately on the outskirts of the park within Magombe Swamp. The wetland is prominent for a diversity of wildlife such as primates, like chimpanzees, red tailed monkeys, red colobus and black & white colobus, plus other mammals like sitatunga, bushbucks and mongoose. The wetland is as well habitat to 138 species of birds. These can be best seen from viewing platforms during the guided walks.

This wetland is a community managed initiative intended to conserving the exceptional bio-diversity as well as the environmental values of the sanctuary. Enquire about this wetland-sanctuary at the Kanyanchu Visitor information Centre or at the headquarters of UWA in Kampala. The Kihingani wetland Guided Walks just as those at Magombe, are carried out within the Kihingani wetland, immediately on the outskirts of the national park close to Sebitoli.