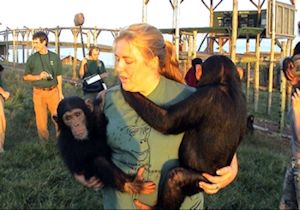 because of the memorandum of understanding (MoU) which was signed back on Tuesday.

The memorandum of understanding between Kajjansi Aero Club (which is Fly Uganda) and Chimpanzee Sanctuary and Wildlife Conservation Trust (CSWCT) will enable  Fly Uganda take sightseers to Lake Victoria’s island famed for the conservation of chimpanzees, and also you will see monitor lizards plus a great array of bird types.
The chopper was bought from the Police Force of the Japanese nearly 3 years before will also help market the other tourist attractions on the island such as community tourism and sport fishing.

the helicopter can carry a maximum of 4 travelers however a return trek will cost $980 for 4 full packages, including access to Ngamba island.

This island has until recently serviced by motorized vessels plus boats only, for a voyage that can take nearly 40 minutes. Using boat, it charges $80 per individual for a at least 4 travelers for sightseers from abroad while east African pay only $60.

“This is a natural expansion to get more visitors to Ngamba islands,” said Russell Barnes, the chief of Fly Uganda at the signing in Kajjansi. A trial flight has reportedly already been done with chimps responding positively by coming over to watch the chopper.

Barnes added that the more time tourists spend in Uganda, the more they will financially spend and enjoy a great experience, and they will even be able to promote natures’ gift to Uganda the pearl of Africa.

CSWCT’s official executive Lilly Ajarova said that Ngamba Island has rescued chimpanzees got from areas in which they were in danger of extinction. She mentioned Western 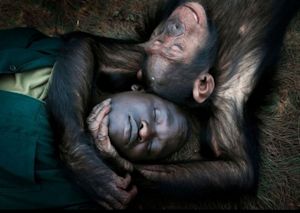 Africa where these chimpanzees are extinct in 4 countries.

Ajarova said that Most of the chimp mothers were killed so they managed to rescue the babies. A number of them were brought in from Europe after they were traced back here to Uganda.
Ngamba Chimpanzee Sanctuary gets about 4,000 foreign tourists each year.
this is a destination that is promoting Uganda because tourists include a lot of other wildlife destinations.

She added that a monitoring system was established to test any negative radical effect of this chopper on the chimpanzees, and fortunately there aren’t any negative effects that where exhibited.

Ajarova said that there were concerns for faster transport mean to Ngamba islands, this will also provide an opportunity for rapid medical evacuation